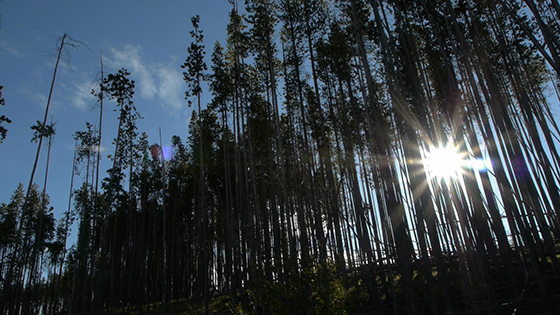 Over 90% of Canada’s forests are publicly owned, generating thousands of jobs and billions of dollars of employment income, tax revenue and economic activity. Forests also provide a broad range of ecosystem services, including water, recreation, biodiversity and carbon sequestration. A changing climate is the largest threat to forest productivity in Western Canada, endangering the ability of forested landscapes to provide ecological, economic and cultural services, both now and in the future.

In BC and Alberta, about 150 million spruce and lodgepole pine trees are planted annually. Typically, foresters plant seedlings grown from local seeds. But, due to climate change, seedlings that were once well-adapted to a specific region are now ill-suited to their changing environment. Over the past decade, this maladaptation has resulted in higher losses due to pests, such as the mountain pine beetle in British Columbia and drought-related dieback in Alberta. Every year, approximately $10 billion of timber is harvested in these provinces. As the mismatch between local environmental conditions and tree populations increases, the volume of this harvest is expected to decrease. The forecasted decline for lodgepole pine is 20% to 35%.

Much like a recruiting expert identifies the best candidate for a specific job opportunity, AdapTree will develop a system to match spruce and lodgepole pine seedlings to the optimal growing environments within their current species ranges. Utilizing state-of-the-art genomics and climate-mapping technologies, the researchers will study lodgepole pine and spruce trees to identify genes that are linked to tree characteristics required for successful growth in the changing climate. AdapTree will then survey trees throughout BC and Alberta to find where trees with the right genetic makeup are growing. By knowing which genes matter and how the growing environment may change, AdapTree will be able match the genetics of a tree to the environment it is planted in, thus improving forest health and productivity.

Understanding the ecological impacts of a changing climate is only part of the story. The potential economic and social outcomes of this research will also be explored through working with a range of stakeholders and end-users, including forest-dependent communities, policy makers and tree breeders. Ensuring that the right trees are planted in the right environment will improve the long-term health of forests and generate economic benefits of hundreds of millions of dollars every year. Ultimately, AdapTree’s research will not only boost forest productivity, but it will also assist the government, foresters and the public in making informed decisions about the future of our forests.