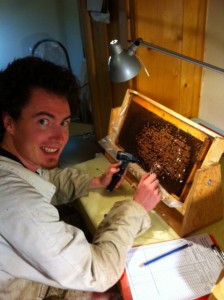 In the summer of 2013 as the Bee IPM team was testing and evaluating their MAS pest management tools, we began a summer collaboration with Max Macdonald, the genomics.entrepreneurish@ubc’s apicultural summer researcher. A critical component of the Bee IPM research was to develop partnerships with potential MAS breeders across British Columbia who could one day be early adopters of this new pest management tool. Prior to Max’s internship, there was little known in the research community about the depth and breath of the knowledge of selective breeding within local beekeeping communities.

Max interviewed 22 B.C. beekeepers with several other informal discussions taking place. There was overwhelming interest expressed by the beekeepers in selective breeding tools that could be proven to produce highly hygienic colonies while at the same time being cost effective. The beekeepers expressed a range of familiarity with MAS breeding techniques and were unanimously eager to learn more about such selective breeding programs from a team of research scientists.

Knowing that the beekeeping (and more importantly the bee breeding community) was keen to become involved in the future of MAS breeding, the genomics team at Bee IPM continued to test their MAS queens both in the lab and on the ground in partnership with beekeepers. At the same time the socio-economics team developed a model to evaluate the impact of integrating MAS-led colonies into a beekeeping operation. The economics team identified key variables such as colony inputs (feed, treatment, labour, environmental factors, initial health status etc.) and outputs (honey, pollination rental income, other bee products, after-treatment health status etc.). These variables were then parameterized using existing data from BeeIPM case studies as well as stakeholder discussions. The objective of developing this model was to as accurately as possible depict the change in colony health and productivity within a Western Canadian honeybee yard as new tools such as MAS are introduced.

The modeling team explored several scenarios including introducing a few MAS-led colonies into the yard at a time vs. replacing up to half of the existing colonies with MAS-led colonies. This range of scenarios represents a plausible initial operating framework for a Canadian beekeeper. The modeling results indicated that if even just a few MAS-led colonies were introduced and performed at even slightly above the yard’s average health and productivity levels, there would be significant profit gain for the beekeeper. As well, the better the MAS colonies performed, the greater the colony health and productivity and the more incentive a beekeeper would have to adopt this technology.

When a larger proportion of the yard is made up of MAS-led colonies, we see that there is an even greater potential for improved outcomes. Replacing anywhere from a third to a half of a yard’s traditional colonies with MAS colonies increased profit for the operation when only half of the MAS colonies performed at an above average level and the other half of the colonies performed at an average level. These results indicate that if MAS-led colonies exhibit healthy and productive behavior, as we anticipated they will, there will be a significant improvement in a yard’s health, productivity and profit. 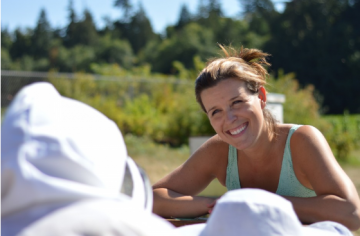 As the Bee IPM project approached its final year, the genomics team was completing its evaluations of the actual MAS-led colonies and comparing their health and productivity to benchmark and other non-MAS colonies. The results have been groundbreaking. Compared to the control colonies, the MAS-led colonies achieved higher levels of hygienic behavior, fewer negative symptoms of disease and pathogens, increased removal of dangerous varroa mites, good winter survival rates and equal or greater productivity levels. It was clear that the results from the economics model were becoming increasingly accurate, mirroring the empirical evidence.

Over the summer of 2014, as much of the Bee IPM testing and evaluating was tapering off and the MAS knowledge transfer to industry was at a critical juncture, Jamie Lee Martin was hired as genomics.entrepreneurish@ubc’s apicultural specialist intern to continue and expand on Max’s work. Based on Jamie Lee’s interviews of beekeepers and breeders, we gleaned even more valuable industry adoption information. Almost unanimously, the beekeepers expressed interest in the MAS project and conveyed their specific interest in acquiring and/or breeding MAS queens in the future. The key issues for the beekeepers included: high colony mortality; maintaining a strong stock of bees; and ensuring the security of existing Canadian bee stocks. Each of these concerns would be at least somewhat alleviated with the adoption of a reliable integrated pest management tools such as MAS.

The results from the Bee IPM project provide an unparalleled opportunity for the future of the Canadian beekeeping industry. The beekeeper interviews conducted by our genomics.entrepreneurish@ubc’s interns provide a strong case for industry’s backing new breeding technologies in the future. Further stakeholder interviews and education across Canada, as well as more genomics research, is critical in the coming years as MAS is refined and becomes more accessible to beekeepers across the country. Industry participation and adoption of tools such as MAS is essential to the success of a strong selective breeding program to encourage healthier colonies and ultimately the survival of honeybees and their ability to thrive in Canada. 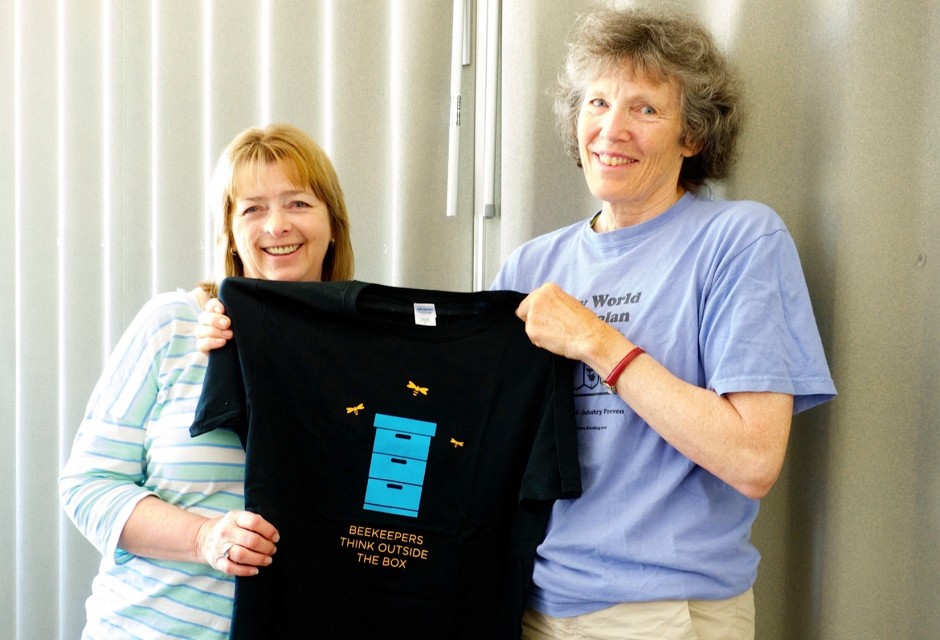