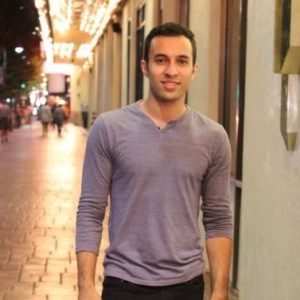 We met Ameen Amanian last summer when he participated in our Genomics 101 “Crash Course.” Since then, Ameen, an entrepreneurially-savvy individual who has an appetite to tackle tough challenges, has become a member of our growing alumni network. A biomedical engineering graduate and current UBC medical student, Ameen is now inspired to host an inaugural Medicine Hackathon at UBC and establish an entrepreneurship club within the UBC Medicine undergrad society. We met with him recently to learn more about his plans.

What gave you the inspiration to bring a Medicine Hackathon to UBC?
It was actually kind of random. I had a Friday afternoon anatomy lab, almost end of day, and I started talking to one of the other students. We began discussing apps and how they’re currently being used in the healthcare system and how they’re going to revolutionize healthcare. We both had an idea to start a club within our undergraduate society on training medical students to have an entrepreneur-like mindset. So, when they are working on rotations or with a physician, and they identify a problem, they will have the resources to try to find a solution tailored towards that.

The conversation then turned to something called a Hackathon, which he said was happening this April at MIT in Boston. I wasn’t really sure what a Hackathon was, so I was hesitant at the beginning. But since he said he was going for sure, I looked into it a bit more, and I realized how interesting it was and was actually amazed at the diversity of people who come out to these events. That’s when I decided to go and check it out.

Editor’s note: What is a hackathon? A hackathon originated as an event in which computer programmers and others involved in software and hardware development, including graphic designers, interface designers and project managers, collaborate intensively on projects. Hackathons typically last between one day and a week, and tend to have a specific focus and in most cases the goal is to create a usable outcome, however some hackathons are intended simply for educational or social purposes. This Hackathon format has now been adopted as a key way of bring together people to brainstorm in many different industries. (Source: Wikipedia)

The Boston MIT Hackathon was an intense, action-packed week. What were your takeaways from your experience in terms of your observations about the scope of challenges medicine faces or the necessary skillset to make these ideas happen in the future?
A personal lesson was that, nowadays, in medicine, I feel like it’s so integrated with engineering and different fields, it’s not one dimension. As medical students and physicians, you have to become multidimensional. At the Hackathon, my colleague and I met an internal medicine chief resident, who was about to finish his residency and start practicing. He was also a coder, a skill that he had picked up as a hobby when he was a kid, and he showed us the apps that he had made throughout his residency. These apps were already in use at his hospital, and their use had led to changes in the curriculum of the residency program. I was amazed that this was even happening and realized that this is what I need to do myself in the future.

In terms of what you observed at the MIT Hackathon, is that an area where people who are actively involved, such as stakeholders, would know best where the challenges are?
It wasn’t just physicians and residents making pitches. I found that researchers and some engineers were also there presenting pitches. That’s because they’re working for a biotech company, and had seen a side of healthcare that they thought can be improved.

What my colleague and I found was that the people whose pitches actually addressed very specific problems manage to end up with the best solutions overall by the end of the weekend. One success story that came out the MIT Hackathon is an oncologist who works in the field of breast cancer. She had an idea and they actually ended up creating an app that would make it easier for her to track her patients. She said she was going to start using it the next Monday! I was amazed by that. I was so happy.

We found that the way you pitch your idea is vital in formulating a solution in such a limited time. So we decided that if we’re going to be hosting a Hackathon at UBC, we want to host a workshop on how to create and present a pitch. During the application process leading up to the event, applicants will have the opportunity to include a pitch they plan to present. For applicants who include their pitches within the application, we hope to contact them prior to the event and help them refine it further. Overall, pitching is very important.

Where are you at in terms of the stage of development for the UBC Hackathon?
So far we have found two mentors for the Hackathon project: Dr. Brad Popovich of Genome BC, and Dr. Kendall Ho, Emergency Physician and Director of the UBC eHealth Strategy Office. We have met with these mentors a couple of times to further talk about the hackathon and our ultimate vision. We’re also meeting a couple students this week to see if they want to be on board. We want our planning team to be diverse as well, so we’re planning to recruit a software developer, someone in Sauder and someone in the design field.

What is your timeline for this Hackathon?
We’re aiming to get started with the planning committee in September 2015, and we want to have the event scheduled for March/April 2016. This is right before final exams so we can ensure students will still be here to attend. But we also want people from industry since our goal is to have a mix of everybody, which is how the MIT Hackathon also took place. They had students from Harvard and MIT and also had people from industry come. It was quite diverse.

Who do you expect to be presenting the pitches at the UBC Hackathon? Is it just for students within the university?
Anybody! I think that anybody who applies for Hackathon, even if they are working for an organization or company, would be welcome to come. We already know there’s so much interest in this.