The Importance of Mapping Your Competitive Ecosystem – Interface Summit 2014

“Build an organization map, in time patterns will become clear and you will be able to map influence” 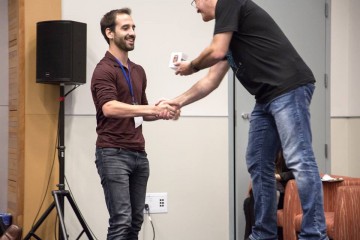 An essential tool from the Lean Launch Pad for Genomics is the ability to ‘get out of the building’ to interact with various stakeholders as part of the process of Customer Discovery (testing a hypothesis), and Validation (finding product market fit). Our instructor Iain Verigin and mentors have often referred to the Lean Launch Pad as a science experiment. They remind us that real world is a lab, where assumptions can be tested.

When we first heard of INTERFACE 2014 Digital Health International Summit, we thought that it would be a great opportunity for our alumni to attend. We sponsored Daniel Terpstra to attend a day of the conference to engage in ‘Customer Discovery.’ This is Daniel’s report:

If you are working to further health technology, whether as a startup or investor, you should be attending the annual Interface Summit here in Vancouver.  The two day event is hosted by Sanotron, a Canadian not-for-profit digital health accelerator, whose intent is to “engage, inform, inspire and connect digital health innovators and other key stakeholders.” Having attended the event myself I can attest to the enabling of invaluable connections that one can’t get through emails and cold-calls.

The theme of this year’s conference could not be missed with topics including “undiscovered change,” “undiscovered markets,” “undiscovered money,” “undiscovered innovators,” “undiscovered healthcare,” etc.  There were so many engaging speakers I had the pleasure of listening to, and so many attendees I had the fortune of talking with.  In total, I heard 33 speakers, 2 panel discussions, and 8 Shark Tank-like pitches, and spoke to 27 attendees.  Three technologies that I found to be very exciting are Primary Peptides, Health Loop, and Medivzor.  Two conversations that had the largest impact on me as an entrepreneur were with Dr. Brad Popovich and Charles Yim.  One insight I want to share is regarding the pitch presentations.

Primary Peptides is led by Dr. Max Cynader, the former Director of the Centre for Brain Health at UBC.  In Dr. Cynader’s words, they discover “how proteins ‘kiss’ each other,” and that information can be used for therapeutics in the areas of Stroke, Parkinson’s, Neurotrauma, addiction, etc. Medivizor was presented by Tal Givoly.  He joked that “Google always gives cancer” when you are seeking medical insight.  With Medivizor you provided personal medical information, and it provides personalized healthcare info based on the latest knowledge. Health Loop was presented by Dr. Jordan Shlain, a medical doctor.  As the name suggests, Dr. Shlain has closed the loop on doctor visits by implementing follow-up care through mobile devices.  The app allows patient input of medical and activity data, and detects impending medical risks. 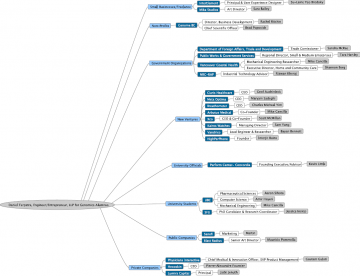 My conversation with Dr. Brad Popovich, the Chief Science Officer of GenomeBC was centered largely around – you guessed it – genomics.  I have been excited to learn more about this domain since I first jumped into entrepreneurship with two feet, so it was an amazing opportunity to connect with someone so in-the-know.

Dr. Popovich is a passionate advocate for whole genome sequencing and its game-changing effect on the future of health.  When I contributed my perception of genomics today being akin to the internet in the 90s, in terms of impact on technology and society, he agreed with the comparison.  He expressed that he believes thousands of startups could be supported by this new opportunity, that there is enough money for all.  As an entrepreneur recovering from his first failure, and looking for new opportunities, this conversation left me more confident than ever that digging deeper in this area is certainly worth my time.

Charles Yin is on his third startup with Breathometer, so he had a lot wisdom to lay down.  At the beginning of the conversation he shared a few thoughts that I had heard before, from watching the “How to Start a Startup” lectures by Sam Altman and gang.  Basically, work on things that interest you and find the best people.  As I shared my personal position and goals, he suggested that I consider working on a small problem for the first company, optimize for learning not for cash, and to be careful jumping to using interns too early.  He advocated the use of accelerators like Y-Combinator, even if they take a percentage of company.  We also touched on funding.  Charles had some awkward situations himself with investment from friends and family, and stressed the importance of clear communication of risk and return.  There were many other things we spoke about, including his meeting with Elon Musk, but ultimately what I got out of this conversation was that Charles is a guy that sees opportunity and he gets shit done – which is the key to his success.

There were 8 companies pitching to 5 ‘sharks,’ and I bet every one of those sharks had wished the presenter went through some equivalent to the Lean Launch Pad for Genomics program at UBC.  Almost every company failed to clearly state the problem they were trying to solve, and why it’s an important problem.  Many of them also missed addressing the market opportunity!  Had they done mock presentations to the likes of Jennifer Thompson and Iain Verigin, they would have quickly realized their shortcomings.  Develop your company’s presentation early and seek criticism from a mentor, like those at Open Office on Thursdays at entrepreneurship@UBC.

The Interface Summit 2014 was exactly what I was hoping it would be.  It was a chance for me to network with exceptional people face-to-face so that if/when I contact them in the future for advice or investment I am not some dude from somewhere – I am Daniel, from Interface.